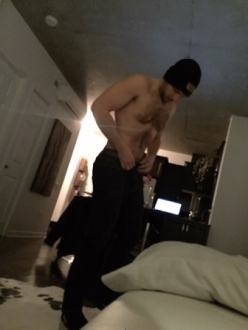 Sorry for the silence, I’ve been in zombie mode (at work) the whole day, but I just woke up from a nap.

So, on Thursday night, after work, Nick sent me a text letting me know he was on his way to my place… I was tired from the previous night, but since he was on his way from so far away (he lives in a rural area an hour away from Montreal) I didn’t have the heart to cancel our night.

However, before fucking, he actually took his time with me.

We had a drink while chatting, getting to know each other… Nick is 26 year old, super tall and manly looking. As most countryside men, he looks and act pretty straight. You won’t tell he’s gay.

He was absorbed by my place, apparently elevators and modern flats are not common in the countryside. Yet, my reality also lacks what he has… I don’t have a boat, or massive pickup truck.

We were clearly attracted by each other, as usually happens to opposites.

Some time later we were in my bed… where he totally got me pregnant with twins! He fucked me 3 times because by the time he wanted to fuck me again was almost 3 AM (and I needed to sleep, before working again at 8 AM).

He was so into me and I was so into him… We actually cuddled after fucking (which I haven’t done in years,) he held me in his arms, kissing me tenderly and overall been sweet and attentive to me.

Just like a boyfriend or someone special makes you feel.

I’m so not used to those kind of things with city guys, that I guess I’ve got an instant crush on him.. But still, I needed to sleep and I had to kick him out because he didn’t seem to want to leave.

I was sitting on his lap and while kissing I said “Il faut que je dors” (I gotta sleep…) “Okay je pars” (okay I leave…) he said with a discouraged toned.

I was surprised by all that happened that night. Usually I have limits when I meet a guy for the first time, but I didn’t have ANY with Nick.

I felt safe because sex was raw, intense, and as real as the man he is.

We’ll probably see each other again, for now I’ll just keep in mind the good time, and last words he spoke walking out the door.