Jesus’s kinder half-sister Angelina Jolie took a break from guest lecturing a Flawless Perfection 101 class at the University of Heaven to bless ELLE magazine with her almighty grace and timeless beauty. Elle just got infinite points and got way more relevant than Vogue. I need to get this cover throw some holy water on it and put it on my wall because, GODDESS! (Duh)

And the King of the monsters made a comeback in theaters and I saw him the other day. Yes! I’m a 36 year old kid. 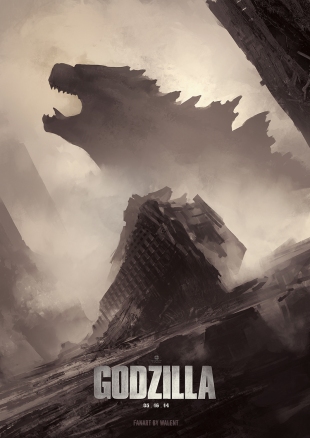 The basic plot of the story is that a breeding pair of giant monsters have matured after feeding on nuclear radiation for several years and are running amok in Japan and the US, the military is powerless to stop them because the creatures generate electromagnetic pulses which disable all electronic equipment (missiles, planes, ships etc) the monsters need to be stopped before their offspring are born and the only one who can stop them is Godzilla!

The movie was alright but it could have been a lot better if they had focused more on Godzilla and not the dumb human storyline. Neither Japanese icon  Ken Wantanabe or Elizabeth Olsen (which I like) convince me in their roles, and nevermind Sally Hawkins, it was a joke. The only 3 remarkable performances was by Bryan Cranston, French legend Juliette Binoche who played a very small role, and of course Khloe Kardashian with all that body paint in her skin playing the mighty Godzilla.

My true call is to help people, I was born to be either a psychologist or a social worker, however, I’m not any of those. I work in the adult industry “behind cameras.” I deal with sex every single day of my life, at work and after work (as my private life is very sexual as well.) I guess providing sexual satisfaction also can be categorized as “helping others.” Although that type of help remains exclusive.

I recently “moved” to WordPress from Blogger because I needed a change.

A year ago I started to record on Blogger all my frustrated romances, my flings and my stories with my fuckbuddies. But recently I decided that it was time to leave all behind. I had a great time, it was sex therapy at its best and I have no regrets.

All those experiences helped me put myself together after my last breakup, because that’s how it works for me. See, you gotta do what you gotta do, keep going, keep trying with no grudges and forgive, not only for whoever did you wrong, but for yourself.

So, here I am, a new start for this old Latino guy. I may not be the best, but I’m certainly a better person when I do right to myself. 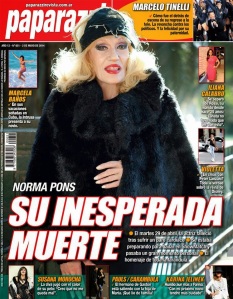 I love arts and I admire many people. One of those people is one of South America’s OVER-THE-TOP stage actress who in life was the great NORMA PONS.

Norma died few weeks ago in the best moment of her long trajectory, but I just read the news about it and it gave me the sads. Norma was from Argentina (a rich cultural country and home of many talented actors (Nacha Guevara) I admire.) She launched her career in the late 60’s as one of the finest showgirls along with her sister Mimi (another Goddess.) And later she turned into the iconic revelation and the stupendous actress that she was.

I always put emphasis in the people I admire not only because of their artistic qualities, but also their qualities as human beings and Norma is not exception. Despite her iconic status, Norma was always a very easy going dow-to-earth lady. She lived a simple life without the excess, she was wise and extremely generous unlike some other very famous ladies in the Argentine show-business who think nobody is better than them due to their legendary status (the insufferable and FAKE Mirtha Legrand.) Norma was the most humble, kind and precious among all of them.

“I was born to be a lover and to be a whore, is the oldest profession and deserves respect. You do not know me and nobody does “

As she also used to say “People go to heaven, but performers go the stars” And without a doubt she is in the brightest of all, because that’s how shiny she was.

The New York Post is absolutely correct and faithful in its coverage. Nothing those two tacky clowns do is any thing other than a self-promoting circus. Well done!

It Will Rain by Bruno Mars

My eyes will do the same, if you walk away…

Mountain Bull, the majestic The 46-year-old, six-ton elephant and one of the most iconic and important elephants in all of Africa, has been killed by poachers in Kenya. A search team from the nearby Lewa Wildlife Conservancy found his body on May 15 and this is one of the most devastating/horrific/disturbing news of this year.

Poachers are estimated to kill as many as 33,000 elephants every year for their valuable ivory. Much of that ivory, which funds terrorism and human trafficking, ends up in the hands of consumers in China, Japan, and the United States, according to a recent report from Born Free USA. WHAT THE FUCK HUMANITY!

To slay a magnificent intelligent creature who is at once an avatar of his species and a priceless antique just for someone’s shoes or jewelry or some tacky knickknack that mainly funds terror, is unspeakable and TRAGIC!

When are these countries going to implement shoot to kill policies like Zambia has, for all of these pieces of garbage?! Their lack of respect for wildlife should in turn give them no right to live themselves. These barbaric human filth deserve to be shot and left for dead!

Soon, we won’t have elephants, tigers or rhinos left. We are harming our ecosystem and therefore harming ourselves. Humans are the most destructive force on earth. We cause more devastation than any natural disaster and ONE DAY we will all pay for it.

You don’t know me yet, but you will.

I’m a good guy, always in long-term relationships and rarely single. In fact, I’m sort of “dating” right now. I have loved deeply and gave my all. But as a single man, I’ve been driven by lust (until I met Joseph) and Lust without You explains pretty much all.

I’m a loner but I’m loving, therefore, I’m somehow lucky with guys (I’m gay) and I’m never fully alone (lovers) despite my solitude and the reclusive lifestyle I choose to live.

I’m an animal lover, romantic by nature and player by heartbreak.

I live in the shadows and the only place I over-expose publicly myself is here on the blogosphere. In person, I am very private, and protective with my partners. This blog represents a new beginning with a new person close to my heart.

Feel free to comment and criticize me if that makes you happy, I can’t care less, because at the end who are you anyway? Life is too short to live it bitter.

And remember… don’t be silly, wrap your willy!